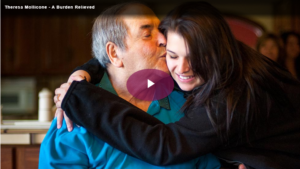 The first time that James Daoust, Jr. visited his clients, Joe and Theresa Mollicone, the couple rolled out a tray of cannolis. James became their financial advisor and over the next three decades sampled countless Italian specialties in the couple’s home. “He got hooked on Italian desserts,” Theresa says. Their close relationship is the reason the Mollicone’s are living comfortably today instead of struggling after a health crisis.

In the early years, James had helped the Mollicones with retirement plans as well as life, disability and health insurance, all of which they had to address on their own because each was self employed. Joe owned an excavation business, and Theresa ran a clothing boutique.

As Joe approached his 65th birthday and his disability insurance was about to expire, James suggested long term care insurance. The Mollicones were initially hesitant, but neither wanted to be a burden to the other or to their two adult children, so they purchased policies.

Less than six months later, Joe suffered a massive stroke that left him paralyzed on the right side and unable to speak. Three months after the stroke, the long-term care insurance policy started paying the maximum daily benefit and has been just enough to cover Joe’s homecare needs. Four years later Joe reached his payout limit, but continues to receive benefits because of his policy’s shared-care rider, which allows him to tap into the benefits from Theresa’s policy. To date, the insurance company has paid out more than $400,000 in benefits.

“If we didn’t have this insurance, caring for Joe would have depleted all the savings we had,” Theresa says. “Now I’m not afraid of running of out money.”

An afternoon nap could improve your cognitive abilities, study says

We started tracking the cost of care 17 years ago and have been trusted source since. Since 2004, fa...

Share Customer Stories The need for long-term care insurance becomes apparent when you see how it be...