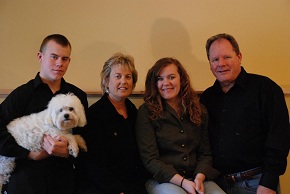 In 1997, Howard decided to enter the insurance field. He was named “Rookie of the Year” his first year in the business. In 1998, Howard’s father-in-law needed three years of nursing home care and Howard realized the need for families to plan for long-term care. That year he joined GoldenCare, the largest independent agency in the LTC insurance industry.

Specializing in the pre/post-retirement market, Howard was the top Long-Term Care insurance agent in 2010 and 2011, he also ranks high in Annuity, Final Expense, Medicare Advantage, and Critical Illness insurance. His in-depth knowledge of products make him invaluable to his clients, but the real key to his success is Howard’s love of working with people and helping them with their insurance needs.

Howard has been married for over 30 years to his wife, Sue. They have two children, Daniel and Laura. A close-knit family, they enjoy summers boating on the Mississippi and spend almost every weekend on the river. During the winter, you might find Howard tinkering with a song in his home studio or playing with his band at local nightclubs on the weekends.